Posted on September 8th, 2010 by Boilapc 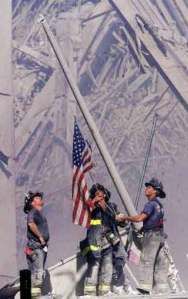 Upon being signed into law on December 18, 2001, Patriot Day is observed every year on September 11 to remember the men and women that lost their lives during the terrorist attack in 2001.  On that day, two airplanes were crashed into the World Trade Center in New York, one into the Pentagon, and one in Pennsylvania.  Thousands lost their lives and their loved ones on September 11, 2001.

In addition, this year there is currently an ongoing debate about the construction of a mosque near the site of Ground Zero.  As a result, instead of being united in remembrance of this terrible day, America is torn and divided on this issue.

As citizens and residents of the United States, it is our duty to observe this day every year.  We do so by flying our flags at half mast and observing a moment of silence to remember the victims of the brutal terrorist attack.   Our president and first lady also ask us to volunteer in our communities as a way of honoring the heroes of September 11, 2001 and the brave men and women in uniform who risk their lives every day to ensure our freedom.  So do your part.  Be a patriot and volunteer in your community.