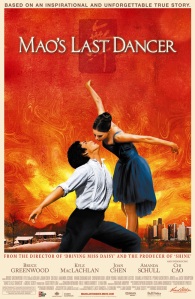 One of the best movies I’ve seen this year is directed by Oscar-nominated Australian Bruce Beresford (“Driving Miss Daisy”).  It is based on the true story of Chinese ballet dancer Li Cunxin who comes to perform with the Houston Ballet on a three month cultural exchange program.  This story includes love, kidnapping, communism versus capitalism, political intrigue and immigration law issues.

Much of the film is the story of the making of a great ballet dancer, so appropriately Chi Cao who plays Li Cunxin’s part is a world class performer for Birmingham Royal Ballet in England whose parents taught  Li Cunxin in China.   Performance of the “Rite of Spring” is both symbolic and artistic in this story.  The theme is freedom of expression and beautiful rural scenes of China are portrayed in the movie.

Li Cunxin’s story begins at the age of 11 in the rural area of Shandong Province when he is torn away from a very poor but loving home by government officials who select him to attend the Beijing Arts Academy.  Communist discipline and emphasis on politically correct art to the exclusion of western civilization is strongly developed though rather overdone at times.  Yet at other times, with great feeling for the importance of artistic expression such as when Li’s former teacher is arrested in China as a counter-revolutionary for failing to use ballet as a communist propaganda tool.

When the young Chinese ballet dancer comes to the US, he speaks little English and is dazzled by the freedom both of speech and artistically.  He is nurtured by Artistic Director of the Houston Ballet Ben Stevenson played by Bruce Greenwood with nuances of being gay.  Li Cunxin falls in love with an American ballet dancer Liz MacKay whom he marries upon the advice of him immigration lawyer Charles Foster.  When his extension of stay in the US is refused by the Chinese government, the Chinese Embassy kidnaps him briefly until political pressure and media forces his release.

Humor is added to the story by Li’s mother who chases off the communist officials who come to arrest her and accuse her for his betrayal of China.  Her retorts and angry words are directed to those responsible in the Chinese government who has had total care for her son since the age of 11.  Bruce Greenwood, the artistic director also has some comical moments in explaining cultural differences with real empathy for the young Chinese ballet dancer.

The dancing throughout the movie is breathtaking and 1980’s relations between China and U.S go from strained to more stable as portrayed through the artistic medium of ballet.